Before the II World War, my grandmother's family used to legitimate itself with armorial bearing Korzbok. The family was quite large. Its history is said to range back to the battle of Legnica in 1241 when the Poles tried to force back the Mongol army of Genghis Khan. At least this is the earliest known mention of Tuchołka in the history of the Polish nobility. The family is said to have originated from the Silesia Region, but as it grew larger, it spread all over the western border - the Great Poland, Pomerania and Cassubia Regions. In the 20th century just before the 1st World War, the Tuchołka family enriched also with German relations. German documents from the II World War concerning my grandmother's imprisonment in Lipsk (Leipzig) refer to her as Sofie von Tuchołka. The "von" before Tuchołka meant that the person carring the name was of noble origin. The by-name "von" did not last until today as well as there are less and less carriers of the Tuchołka name today. After all, that was the point of the II World War agression on Poland. To exterminate the Polish intelligence, to weaken the nation and the country. Anyway, I did not really intend to summerize the impact of the II World War on Poland. What I wanted to do was to mention that the Tuchołka family possessed many estates in the western regions. One of the best documented is the Palace in Glinno, which hid at its backyard the famous dworek Bogusławskiego, an estate from the 17th century, home to the father of the Polish theatre, Wojciech Bogusławski (9.4.1757 Glinno - 23.7.1829 Warsaw). Sort of a mythical Arcadia. The building was taken apart in 1951? (1948?) for the sake of creating a military training ground in the neighbourhood. Today you can enter the zone only with special pass if no demonstrations take place. Still you can find a lot of ruins in the zone, for example of the local church and also the foundations of the Bogusławski's estate in Glinno. 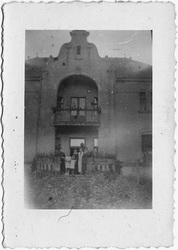 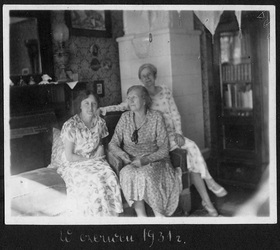 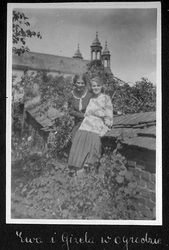